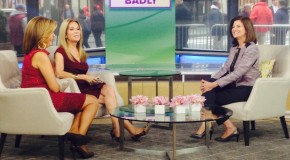 admin October 17, 2016 Comments Off on When Parents Behave Badly

Solutions I shared on the TODAY show to six VERY bad, ugly parent behaviors that are affecting children’s character THE REALITY CHECK:  • Referees giving parents lollipops are youth hockey games to stop them from yelling at

How to curb kid test jitters, get ready for those tests, improve scores, and know if it’s time to seek medical advice One of kids more dreaded four-letter words: T.E.S.T. These days it seems even

Dateline’s “My Kid Would Never Do” That Series: A Must Watch!

I’ll be the parenting expert to a special Dateline series that starts this Sunday. Coming up on Dateline is a parenting series that I urge you to watch. The first of the series airs

Does ‘Teaching to the Test’ Actually Encourage Cheating?

Michele Borba February 6, 2012 Comments Off on Does ‘Teaching to the Test’ Actually Encourage Cheating?

By  Character Education Partnership “Teachers matter,” said President Obama last week in his State of the Union address. “Instead of bashing them, or defending the status quo let’s offer schools a deal. Give them the

Kaila is not yet four, but the young girl from San Diego already has the makings of an empathetic child. When I banged my toe at a party, the three- year-old was the first to my side. I watched her size things up, look carefully at my “injury,” and then empathize. Her face switched from inquisitiveness to concern, and then she looked up with the biggest eyes, and said, “I sorry ’… END_OF_DOCUMENT_TOKEN_TO_BE_REPLACED