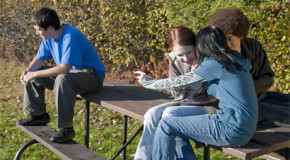 If You’re Worried About Your Kids’ Friends

Michele Borba February 7, 2016 Comments Off on If You’re Worried About Your Kids’ Friends

Bad friends. It’s every parent’s worst nightmare: we imagine only the worse: drugs, smoking, sex, trouble with the law. But what should parents do if they notice that their daughter is hanging out more

Parents Too Plugged In? That’s What the Kids Say

Parenting advice I shared on the NBC DATELINE special “The Perils of Parenting” and wow was it ever an eyeopener! “She’s always on her blackberry. It’s soooo annoying!”     “I hate it when

Parenting advice I shared on the Dateline special, “The Perils of Parenting” to help reduce risky teen drinking and driving behaviors that might even save your teen’s life! See also my post, 11 Driving

11 Driving Tips That May Save Your Teen’s Life

Michele Borba December 24, 2013 Comments Off on 11 Driving Tips That May Save Your Teen’s Life

REALITY CHECK: Nearly 10,000 youths have died as passengers in car crashes. Of those crashes, 54% were riding with a teen driver. Car crashes are the leading cause of death for tweens and teens.

10 Ways to Make Prom & Grad Night Safer For Our Teens

REALITY CHECK: Did you know the period between prom through graduation are statistically the deadliest time of the year for teens on our national highways? Here are ways to keep your teen safe and

Advice to help you pick your battles, upgrade your strategies,boost a stronger relationship and keep your teen safer  Let’s face it, parenting a teen is sometimes like walking through a minefield. They’re usually moody,

Dateline’s “My Kid Would Never Do” That Series: A Must Watch!

I’ll be the parenting expert to a special Dateline series that starts this Sunday. Coming up on Dateline is a parenting series that I urge you to watch. The first of the series airs

Parents Too Plugged In? That’s what our kids say

Parenting advice I shared on the NBC DATELINE special “The Perils of Parenting” and wow was it ever an eyeopener! “She’s always on her blackberry. It’s soooo annoying!” “I hate it when he’s talking