Girls Got Game? Discussing Video Games and Stereotypes In the Classroom

Michele Borba April 2, 2015 Comments Off on Girls Got Game? Discussing Video Games and Stereotypes In the Classroom 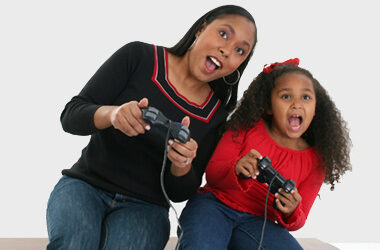 Here’s a special post from my colleague, Rosalind Wiseman, author of the must reads, Masterminds & Wingmen and Queen Bees and Wannabes and is an extraordinary source on bullying, creating cultures of dignity and the boy and girl scene.

The realization came upon me gradually, that is until it hit me over the head. In casual conversations, I noticed that more and more, girls were telling me they liked playing First Person Shooter (FPS) games. These are games a lot of parents and educators hate—the ones where the player holds a gun and runs around “killing” people. Then last fall I was presenting to 700 7th grade girls and put up a screen shot of a popular FPS game.

My goal in doing this was to talk to the girls about boys… but an extraordinary thing happened. Many girls in the audience started to cheer. I was confused. “Girls,” I asked, “Do you like playing this game?” More cheering. I put up another image of another popular “violent” video game. More cheering. “Hold up girls, I’m going to call out other games and you tell me if you play them by clapping or cheering. Ready?” Call of Duty Black Ops? Ghost? (these games are within the Call of Duty franchise) Halo? Skyrim? Assassin’s Creed?

I came out of that presentation stunned and curious. Was it true that more girls than I thought were playing “violent” video games? Did they consider themselves gamers? Did boys know that more girls were playing these games? And how did this fit with the media firestorm that was raging about sexism in games?

Then I had questions for myself. Why did I assume they didn’t play these games? Gaming, especially the games I had mentioned to the girls, was commonly thought to be a “no girls allowed” space. So shouldn’t it be a good thing that more girls were playing these games?

I needed to learn more, so my colleague Charlie Kuhn and I reached out to the gaming expert, Ashly Burch, who I worked with when I wrote Masterminds & Wingmen. Together, we developed a survey to ask girls about what games they played and how they felt about female representation in games. But we also asked boys similar questions about gender representation in games and their feelings about girls who gamed. Because maybe the prevailing belief, that gaming was a boys club where girls weren’t allowed or welcome, was wrong.

I’m an educator, not a researcher and neither is Ashly or Charlie. But we worked with teens to develop the questions and then asked colleagues who do conduct academic studies in the field to review our work. The results? We got over 1400 responses from 6th-12th graders from schools throughout the country.

The results were fascinating for many reasons. But most importantly, for people who work with young people it gives us the opportunity to discuss bias, our assumptions and how both impact public discourse. If you want to facilitate discussions about this, below you’ll find some significant findings, each followed by questions you can use with your students.

GIRLS ARE PLAYING ALL KINDS OF GAMES

While 32% of girls we surveyed said they play games on their phones, 26% of our female respondents said they played First Person Shooter Games, 17% played sports games and 36% played Role Playing Games.

A common stereotype is that girls only play games on their phones, like the Kim Kardashian game or Clash of Clans.

WHAT DID THE BOYS THINK? GUYS WANT GIRLS TO PLAY MORE GAMES

GUYS ALSO BELIEVED THAT GIRLS WERE ALREADY PLAYING THESE GAMES

BUT GIRLS HAVE STRONG OPINIONS ABOUT WHO THEY WANT TO PLAY

In high school, the majority of boys don’t have a preference of the main character but girls do.

High School Boys would rather play a…

High School Girls would rather play a…

If we look at this in Middle School, the numbers are different.

Middle School Boys would rather play a…

Middle School Girls would rather play a:

However, things get interesting in high school. In our findings, girls wanted to play their own gender more than the boys and that finding increased as the girls got older whereas older boys trended towards having ‘No Preference’.

MOST MALE GAMERS WANT MORE FEMALE HEROES IN THEIR GAMES

86% of boys that identify as gamers want more females playing their games.

57% of boys who identify as gamers believe that female characters are too often treated as sex objects.

These are high numbers and are in direct contradiction to the assumption that male gamers are misogynistic. Of course there are male gamers who are sexist but why do those people have the biggest voice in the media and public discourse?

DO WE HAVE TO TALK ABOUT THIS EVEN IF WE HATE GAMES OR DON’T THINK THEY DESERVE THIS MUCH ATTENTION?

I know video games (especially ones with violent or sexual content) can make many adults uncomfortable and their preference would be that no young person would play these games. But the reality is that the world of video games is complex and an important and permanent part of our culture.

Games also give young people the opportunity to learn how to balance their responsibility to treat others with dignity with their right to express themselves freely, be creative, work in a group, and contribute to something that is valuable to them. Young people need to know from the adults in their “real lives” that they have the voice now to make games better and challenge the loudest in the gaming community who may not represent their values and core beliefs.

It is also true that the young people who play these games today will be the game developers and designers of tomorrow. They will have the power to make the heroes that they want to play. They will have the power to decide how people will interact with each other online. As our on line and real lives increasingly intertwine, we need to give them all the knowledge and skill to make both lives as civil, inclusive and respectful as possible.