Teaching Kids Sportsmanship Both On & Off the Field

Michele Borba January 14, 2014 Comments Off on Teaching Kids Sportsmanship Both On & Off the Field 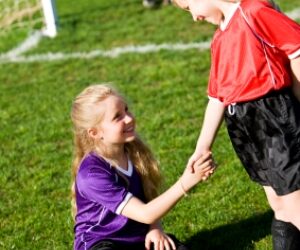 Watching any kid be a poor loser is embarrassing, but when the kid is yours it’s darn right humiliating. Sure, the kid may be the best violinist in the orchestra, have the highest grade point average in the class, the best cheerleader on the squad, or be the greatest hockey player in town, but the moment she starts arguing, making excuses, cheating, blaming others, or booing, her skills no longer matter. What everyone sees instead is a poor loser, and that’s a tough image to erase.

A “win at any cost” mentality often means putting everything aside—including good ‘ol homespun values like consideration, camaraderie, humility—and letting selfish, egocentric ways take over. It’s all the more reason to help your kid learn to win as well as lose gracefully both on and off the field.

Tuning up this attitude is all about how to help our kids play the game called life – and how to play it well. We must replace a poor losing attitude with the virtues of good sportsmanship, fairness, and forgiveness.

1. Check your own response

How do you respond when your kid loses a sporting event, a competition, or gets a poor grade? Do you focus your attention on…

Or are you more likely to focus on team building, cooperation and sportsmanship like..

What message is your kid picking up from your response? What response do you now realize you should never repeat? One big reason we may have such an epidemic of poor losers is because we aren’t doing such a great job of modeling how to win or lose ourselves. Read on….

REALITY CHECK: The National Association of Sports Officials announced that it receives two to three calls a week from an umpire or referee who has been assaulted by a parent or spectator. Complaints range from verbal abuse to an official having his car run off the road by an irate parent. Youth sport programs in at least 163 cities are so concerned about the growing trend of poor parent sportsmanship that they now require parents to sign a pledge of proper conduct while attending their kids’ games.

Any time your kid exhibits a “poor loser attitude” (for example: makes an excuse, blames others, can’t accept criticism, boos the other team, criticizes his coach, teacher, sibling, or parent) call him on it and let him know that kind of attitude isn’t allowed. Explain that she must be considerate of other people’s feelings and if she is not, she may not participate. If he exhibits the attitude with others, “yellow card” him: Take him aside to correct the action right away. And if your kid displays any aggressive or uncivil behavior–such as booing, hitting, or cheating—remove her immediately from the activity.

The only way your kid will learn that winning isn’t everything (especially when people remember only that your were a lousy loser) is by you stressing sportsmanship over victory.  Some families have a personal motto that that represents their attitude such as: “It doesn’t matter if you win or lose, it’s how you play the game.”  “If you can’t play nicely, you don’t play.” “Winning isn’t everything.” “What people remember most is how you play the game.”  You might suggest a few to your kids, choose the family favorite and then intentionally repeat it again and again until they can recite it without reminders.

4. Look for teachable moments to point out right and wrong way to handle defeat

One lesson every kid needs to learn is that everyone suffers setbacks as well as victories, and sensitize him to others’ feelings. While watching American Idol, a quiz show, or some other sporting event on television with your child say: “They’ve worked for years for this. They’ve practiced for hours. Let’s watch to see if we can tell how they feel. Look: they’re shaking hands with their opponents.”

Or following your kid’s band competition try: “Congratulations, your school won! Did you notice how some of the kids acted who lost? They were complaining that the event wasn’t fair. It sure didn’t seem like they were being good sports. Better that they kept those thoughts to themselves.” (Hint: the TV shows like Dancing with the Stars, American Idol, Survivor, or the Apprentice are perfect to point out both good and bad sports. Use those moments).

Good sports and good losers support and encourage each other. You can help your kid become more encouraging by teaching the ‘Two Praise Rule.’ The rule is simple: you must praise your peers at least twice before the event ends.

Discuss a few encouraging comments or actions so he has a beginning repertoire–such as “Super,” “Smart answer” “Good argument” “Good performance.”  Keep expanding the list and suggest your child practice the rule at any group activity–a team game, a scout meeting, a friend’s house, school, as well as at home.

6. Teach how to lose gracefully

Everyone makes mistakes–it’s how we learn. But some kids don’t know how to handle their defeat and lose gracefully. And because they lack that skill, they often look like poor losers. So teach your child the skill of how to lose gracefully. For example: “Good debate!”  “That was close.” “Let’s do it again.” “I gave it my best.” “Let’s try again tomorrow.” “You game for a rematch?”  Help him practice at home so he can confidently say them to his peers.

7. Dust off those Candyland and Monopoly games

Start practicing these tips with your kid N.O.W. And the best way to teach any new skill (this one is research proven at both Duke and U.C.L.A.): rehearse with your child. Start playing checkers or horseshoes or volleyball with your kids. But deliberately model those rules of good sports: “Let’s agree to the rules and review them.” “Remember, we finish the game and stick to those rules.” “We encourage our teammates and don’t criticize.” “We shake hands at the end of the game — win or lose.” Add what ever other tips your want…but start reviewing.

Do remember: Whenever your kid makes a mistake, show your support with both your words and your nonverbal reactions. The quickest way your kid will learn to handle defeat gracefully is feeling your acceptance to his errors.

This blog from is adapted from my book, The Big Book of Parenting Solutions: 101 Answers to Your Everyday Challenges and Wildest Worries (Jossey-Bass) which is a complete parenting reference (over 700 pages) to the top parenting problems with research-based, practical answers. For more parenting solutions on this topic refer to the chapters on Organized Sports, Gives Up, Bossy, Impulsive, Whining, Back Talk, Argues, and Poor Sport (or others).

For daily parenting tips, follow me on twitter @micheleborba or on my daily blog at Michele Borba.com