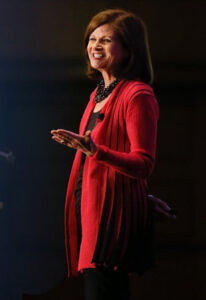 A sought-after motivational speaker, she has spoken in 19 countries and five continents, and served as a consultant to hundreds of schools and corporations.

Clients include Sesame Street, Harvard, U.S. Air Force Academy, 18 US Army Bases in Europe and the Asian-Pacific, H.R.H. the Crown Prince of Abu Dhabi. and a TEDx Talk: “Empathy Is a Verb.” She offers realistic, research-based advice culled from a career working with over one million parents and educators worldwide.

She is the award-winning author of over 24 books translated into 19 languages including Nobody Likes Me, No More Misbehavin’, Don’t Give Me that Attitude!, Building Moral Intelligence, Parents Do Make A Difference, The Big Book of Parenting Solutions, End Peer Cruelty, Build Empathy, and UnSelfie: Why Empathetic Kids Succeed in Our All-About-Me World. Her latest book (spring 2021) Thrivers: Surprising Reasons Why Some Kids Struggle and Others Shine.

Awards include the National Educator Award (presented by the National Council of Self-Esteem), National Child Safety Award of 2016 by Child Safety Network, Santa Clara University’s Outstanding Alumna Award, Outstanding Contribution to the Educational Profession by the Bureau of Education and Research and a 2016 SHORTY nominee for “Best Social Media Influencer in Parenting.”

She was named Honorary Chairperson for Self-Esteem in Hong Kong, consultant for the Character Education and Civic Engagement for the U.S. Dept of Education, Disney Influencer, and Goodwill Ambassador for M.I.T.’s One Laptop per Child project. Board memberships include Parents, Character.org, Child Safety Network, Boys & Girls Club of America, USTA Sportsmanship Committee. Her proposal: “Ending School Violence and Bullying” (SB1667) was signed into California law in 2002.

Dr. Borba is a former classroom and special education teacher with a wide range of teaching experience, including work in a private practice with children with learning and emotional disabilities. She received a Doctorate in Educational Psychology and Counseling from the University of San Francisco, an M.A. in Learning Disabilities and B.A. from the University of Santa Clara, and Life Teaching Credential from San Jose State University. She lives in Palm Springs, California with her husband and has three grown sons.