4 Secrets to Raising a Compassionate Child

Empathy is the trait that helps make the world a kinder and gentler place, and empathy can be developed and improved. Wherever your children fit on the “caring about others” scale, there is always room for improvement. But what are proven ways parents can increase their children’s capacity to be kind and care? I’ve sought that answer for over a decade and interviewed dozens of leading experts to find it. 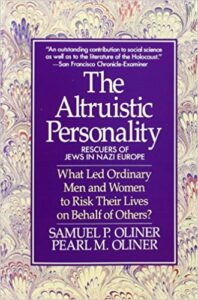 Ironically, it was at the site of unimaginable horrors, the Auschwitz concentration camp, where I found a key discovery. At the Auschwitz bookstore I happened to pick  up a book called the The Altruistic Personality. My copy is now filled with notes and dozens of tabs: it is a fascinating read. And there among those pages I learned that the answer to evil is empathy. That finding was the catalyst to my writing,  UnSelfie: Why Empathetic Kids Succeed in Our All About Me World. So, if you ever wonder whether you can instill caring in a child, you do.

Seeds of Empathy Are Planted by Parents

The Altruistic Personality describes the results of a now infamous study that showed just how much parents can influence the development of the traits of humanness like caring, compassion, empathy, social responsibility and kindness. And it was conducted by two social psychologists named Samuel and Pearl Oliner.

Nazis killed Samuel Oliner’s family, but a Polish peasant woman named Balwina saved him when he was  twelve. “Balwina Piecuch’s act of kindness and caring not only saved my life, it formed my life,” he later said.

Sam Oliner and Pearl Oliner, his wife, spent the next three decades interviewing more than 1,500 Christians-both non-rescuers and rescuers-who had lived during Nazi-occupied Europe. Their goal was to determine why some, like Balwina, put themselves at great personal risk without external rewards while so many others did not. It is one of the most extensive studies of people who rescued Jews during the Holocaust and why some people care so deeply. The Oliners found several distinctions in rescuers.

First, most rescuers were deeply empathetic: they simply could not stand by and watch others suffer.

Many also had a strong sense of self-efficacy and believed they could make a difference and help others.

The majority had internalized a strong identity based on caring values and an ethic of social responsibility.

But how did those rescuers acquire those beliefs? “It was how I was parented” was a recurrent response.

There were four practices the rescuers’ parents did that helped instill their caring values.

First: The rescuers’ parents strongly emphasized kindness, and expected their children to apply the value to all people.

Third: The rescuers’ parents tended to have closer relationships to their children than did the bystanders’ parents, and were felt to be warmer and more supportive.

Fourth: The rescuers’ parents modeled caring behavior in their interaction with people outside the family.

In contrast, non-rescuers were far more centered on their own needs or felt obliged to help only a small circle of others. Their parents were also more likely to stress monetary values (“Be thrifty,” “Get a good job”) than caring, moral concerns.

Are You Modeling What You Want Your Child to Catch?

When it comes to raising compassionate children, parenting does matter. But it’s not buying apps, paying for fancy tutors, giving long lectures, or sending kids to pricey camps that cultivate children’s hearts. The Oliners would tell us that who we are and what we stand for counts far more than all our long, endless parenting “to do” lists.

“Moral behavior is the consequence of empathy, caring for others, a strong attachment to the moral community, and an ethical obligation to all life. Reaching out to others at considerable personal risk, as Balwina Piecuch did, and as many, many others have done, has been the force behind much that is good in the world. It has saved innumerable lives and inspired new acts of generosity and heroism.” — Samuel Oliner

For our children’s sake, may we stand for kindness and model empathy.

If you want to learn more about cultivating empathy, you may be interested in watching my TEDx Traverse City talk: Empathy Is A Verb.

I’ll share proven ways in this blog that we can use to cultivate our children’s empathy and switch their attitudes from WE, not ME. The ideas from this post are adapted from my latest book, UnSelfie: Why Empathetic Kids Succeed in Our All About Me World which offers dozens of proven ways parents and teachers can use from toddlers to teens to raise strong,  compassionate, courageous children.