Empowering Kids to Be Active Bystanders Through Books

Research shows that when student bystanders intervene correctly, bullying can be cut more than half the time and within 10 seconds. – Pepler

Bullying is cold-blooded, intentional cruelty,and will flourish if tolerated. Forty-nine states have now passed anti-bullying policies and so-called bullying prevention programs are cranking off the presses in record numbers. Beware: Farrington’s analysis of over 600 bullying “programs” found only about one fourth are effective in reducing peer abuse. Studies do show that mobilizing students to become active bystanders may be our best hope in reducing bullying. Active bystanders can:

My blog post, Mobilizing Bystanders to Stand Up to Bullies, shows my Dateline special that reviews how to teach specific bystander skills to kids.  Here are some of my favorite books I use with students when I teach bystander skills. The first step to helping kids step in and speak out against cruelty is mobilizing their hearts and providing the right examples.

Poor Rodney Rat can’t pronounce his R’s and the other rodents tease him mercilessly. But when Camilla Capybara joins Rodney’s class and announces that she is bigger, meaner, and smarter than any of the other rodents, everyone is afraid. That is until our unwitting hero, Wodney Wat, catches Camilla out in a game of Simon Says. Wodney surprises himself and his classmates by single-handedly saving the whole class from the big bad bully. Children will delight as shy Rodney Rat triumphs over all and his tiny voice decides the day, R’s or no R’s. Plain glorious!

Nobody Knew What to Do

This story tells how one child found the courage to tell a teacher about Ray, who was being picked on and bullied by other kids in school. When bullies pick on a boy at school, a classmate is afraid, but decides that he must do something.

The Juice Box Bully: Empowering Kids to Stand up for Others

by Bob Sorson and Maria Dismondy

Here is how one child found the courage to tell a teacher about Ray, who was being picked on and bullied by other kids in school. When bullies pick on a boy at school, a classmate is afraid, but then decides that he must do something.

The main character of this story is a young girl who watches sadly as some of her classmates mock and harass fellow students. Then one day when her friends are out, she ends up sitting alone in the cafeteria and becomes a target for the bullies. Once home she complains to her big brother, “I was mad at the kids at the table next to mine.” He shrugs and says “Why? They didn’t do anything.” That is her moment of truth. She realizes that not participating in the teasing is not enough—she has to do something actively to prevent it. The next day she makes friends with one of the bullies’ victims, a girl who always sits alone on the bus, and becomes her revelation.

Lotty Raccoon is excited: she has a new teacher, new backpack, and new shoes. But her enthusiasm quickly wanes when Grant Grizzly begins bullying her. Advice from her brother, sister and parents don’t work. After talking to her family again, Lotty comes up with an idea. She notices other kids are being bullied by Grant, too. She gathers her friends together and they form The Bully Blockers Club. Now when Grant tries to bully someone, the other kids speak up which gets an adult’s attention, and Grant stops bullying!

It’s never easy to be the new kid in class, but the ordeal is especially trying for children who look markedly different from their peers. Rose Marie, the newest student at Central Avenue Elementary, is overweight and is relentlessly taunted by the particularly cruel (and very thin) Genevieve. But Rose Marie finds comfort in her budding friendship with Claire, a meek girl who also endures teasing because of her red hair and freckles. Finally, kind-hearted Claire can stand it no more–“You’re not a nice person, Genevieve!” she shouts. After that, Genevieve is the one on the outs, and Rose Marie has no more trouble making friends.

The Bully Blockers: Standing Up for Classmates with Autism

Research shows that children with Autism are more likely to be bullied than their peers. They make easy targets because they are socially awkward and often times unaware they are being bullied. For the child with Autism, there are severe emotional, and sometimes physical, consequences to being repeatedly bullied. Here is the story of a boy who witnesses a classmate with Autism being bullied and how he decides to get involved. This book shows that one child can make a difference when he has the courage to stand up for his classmate.

The Yellow Star: The Legend of King Christian X of Denmark 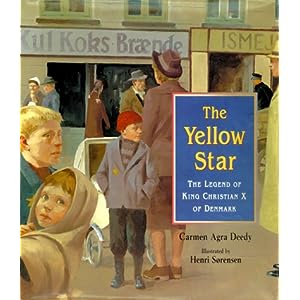 For centuries, the Star of David was a symbol of Jewish pride. But during World War II, Nazis used the star to segregate and terrorize the Jewish people–except in Denmark. When Nazi soldiers occupied his country, King Christian X of Denmark committed himself to keeping all Danes safe from harm by wearing that same yellow star. The bravery of the Danes and their king during that dangerous time has inspired many legends. The most enduring is the legend of the yellow star, which symbolizes the loyalty and fearless spirit of the king and his people. The result is a powerful and dignified story of heroic justice, a story for all people and all times and the power of an upstander!

This is the moving story of how Jackie Robinson became the first black player on a major league baseball team. Listening to the hatred that spilled out of the stands for his teammate, Pee Wee Reese left his position at shortstop, walked over to Robinson at first base, put his around Robinson’s shoulder, chatted for a few moments, and then returned to his position. The gesture stunned the crowd into silence. It’s a glorious moment to discuss with kids – the power of an upstander to change bullying with a silent gesture- a mere arm on your friend’s shoulder. That fateful day in Cincinnati, PeeWee Reese took a stand and declared Jackie his teammate. Kids can now rewind the clock and recognize that moment as well. I cheer every time I read this one to kids. LOVE IT! 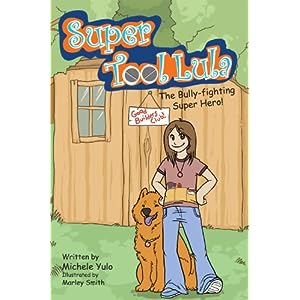 Lula is a precocious ten-year-old who has her own tool belt and helps her dad with carpentry projects. She loves science, playing the drums, riding her skateboard, and hanging out with her friends in the Good Builders Club. As Super Tool Lula, she uses her super hero gifts and magical tools to protect and come to the aid of kids who are mistreated or bullied. She wants all kids to know that being kind is cool. There is also an afterword about bullying and advice from educational consultant Lori Day.

Eric is the new kid in the seventh grade.  Griffin wants to be his friend. He seems cool, confident, and popular. Over the next few weeks Eric learns that Griffin is the sort of kid who you don’t want for an enemy.  He’s also one of those kids who adults think is a “nice kid” but really uses his magnetic personality to control the kids around him.  Eric realizes his buddy is really is a bully as well as a liar and thief ,but doesn’t do much about it. Though not the target, he fears stepping in will only make him the bully’s (Griffin’s) next target.  Eric wants to break away and do the right thing, but his brain tells him that he will be the next victim if he does anything. And then in one shocking moment, Eric goes from being a bystander to….(I’m not telling, but it makes for a great, unpredictable discussion with kids on that ending!)

The Forgotten Hero of My Lai: The Hugh Thompson Story I adore this story and am so moved by Hugh Thompson-an upstander exemplar. His story is one that needs to be discussed in high schools across the country. I’ve spent weeks researching his background to find out what moved this man’s conscience and motivated his actions. Parents, take heed: Thompson swore his moral courage was due to how he was raised.

This review is by Terje Lund:

“It is impossible not to be moved by this great story. Any serviceman will know that not obeying orders and even worse – to turn your weapons on your own and make a crystal clear threat – usually means severe trouble; either being shot at the spot or to be court-martialed and kicked out of the military. This is the unique story of a man and his crew who did just that- all to save some civilians they didn’t know and had no responsibility for. They could easily have turned their heads away, and gotten away from it. But they acted, and took charge. And they saved lives! Humanity needs heroes and ideals that we can look up to and to lead us in difficult moments.”

These are a few of my favorites, but there are dozens of other wonderful pieces of literature that deal with bystanders. The key is find relevant books that have the potential to meaningfully impact your children’s lives. The story must be rich with a moral dilemma, be age appropriate, address cruelty, injustice, and bullying, and then reveal a character who decides to step up and become an UPSTANDER. That moment can be transformational for a child, for a school, and for our communities. That moment can mobilize a child’s heart to step in, step up and speak out against injustice.