How to Teach Kids Empathy-Building Skills

Empathy is the critical ability that puts us in other people’s shoes and helps us feel with them. Research finds that this immensely human trait can be cultivated. That means we can teach empathy to kids just like reading, math, and writing because it is made up of social-emotional skills that can be developed.

It’s time we recognize that empathy is anything but soft and fluffy, but  crucial for our children’s success, happiness, and character, as well as key to helping them become contributing members of a global world.

So how do we weave in empathy-building into our packed days? That’s what I spent ten years researching as I wrote UnSelfie: Why Empathetic Kids Succeed in Our All-About-Me World. In the process I found dozens of simple cost-effective strategies like the one that follows. I also recognized that our best hope for children to develop habits of empathy is for educators and parents to work together in their empathy-building efforts. What follows is one of the effective ways I’ve observed. Not only does it match the research but also is most likely to help kids actually develop the skill so they can use it without us!

Shipley is a private school with a stellar academic reputation, but it also embraces social and emotional learning to prepare students for life. I observed Shipley’s monthly “Parent Drop-In Day,” where Lucy McDermott’s second graders schooled their moms and dads in a crucial empathy-builder called, “I Messages.” I realized that how her students were learning the core social-emotional skill is exactly how parents and educators should teach any empathy-builder to kids. 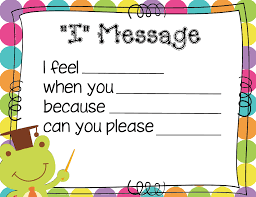 An “I Message” (or “I Statement”) is a sentence frame to assert the feelings, beliefs, values, or concerns of the person speaking. The message generally begins with the word, “I,” (contrasted with starting with “you,”) and can be a valuable interpersonal communication tool to help children share their concerns, views, or feelings to another in a respectful way.

The strategy also reduces conflicts and restores relationships so “I Messages” can be a technique to keep empathy open and reduce the notorious Empathy Gap. The sentence frame has been used for years, but too often students must be prompted by an adult to use it. Ms. McDermott was teaching the skill so her students were more likely to transfer and use it outside the classroom..

Empathy-building skills must be developed and practiced repeatedly before children can “live them.”

“We use ‘I Messages’ to help us share our feelings with words such as: angry, sad, hurt, uncomfortable and frustrated,” he explained. 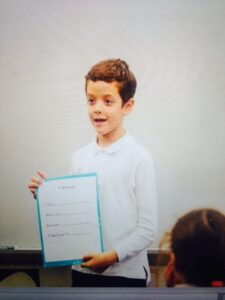 Then Josh explained the benefits: “‘I Messages’ help us to solve disagreements and conflicts. They help us communicate, and allow us to really listen to each other.” And he held up a chart showing the formula:

“To give an ‘I Message’ start by saying: ‘I feel…when you…because… and I need you to…”

“To receive an ‘I Message’ respond by saying: ‘You feel…when I…because… I will…’”

Next, students showed parents how to use “I Messages” by role-playing different scenarios. This was the powerful piece. Research substantiates that children learn skills best by showing-not telling-them what it looks like. These students were showing the empathy skill to their parents. Brilliant! 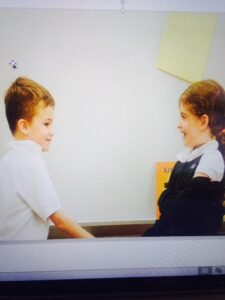 Then came the grand finale: Moms and Dads practiced the skill in child-led “tutoring sessions.” And interactions were priceless. One was plain unforgettable:

“Dad, I’m frustrated when you use your cell when I’m talking, because I feel you care more about your phone than me,” one boy told his dad. “I want you to put your phone away when I talk to you, please.”

From the Dad’’s pained look you knew his son’s words hit home. And then it was the Dad’s turn to use the “I Message.”

“Josh, you’re frustrated because you think I care more about my phone when you talk to me,” he answered. “You want me to put my phone away when you talk.” And then added, “Thanks for telling me, I promise to work on that.” His son smiled broadly: Dad was really “getting it.”

Lucy McDermott was teaching her students empathy-building skills using four steps that are crucial to mastery.

Second, they explained the benefits: “’I Messages’ help us to solve disagreements and conflicts, communicate, and really listen to each other.”

Fourth, students taught the skill to someone else (in this case, their parents).

Those four steps are also the optimum way to teach any new social-emotional skill or empathy-building habit to a child.

Lucy McDermott found an ingenious way to help her students teach their parents a critical empathy-building skill. But what about parents who weren’t at her event? And what other ways can educators help parents learn skills to expand their children’s empathy? Try these tips:

1.Make a video of an event like McDermott’s and share it with parents at your back to school night, parent conference or to new students.

2. Have students make a video showing how to use the skill and send it home for them to share with their family on flash-drives.

3. Put your video on a television monitor and show it on a screen in your school hallway like a PSA announcement so everyone entering your building sees the skill.

4. Create a worksheet or poster of the skill, and send it home as “homework.” Each child teaches the empathy-builder to their parents who sign a form substantiating the parent-child practice.

5. Turn the worksheet of the empathy-skill into a small magnet for parents to put on their refrigerators as an ongoing reminder.

Finding simple ways to educate parents about social-emotional skills improves the likelihood that students will use them both inside and outside the classroom. You can use the four steps to teach your child any empathy building skill in UnSelfie (and there are dozens). Just choose one skill a month (or as long as it takes), and keep reviewing, modeling, reinforcing and practicing it until the child can use it alone. Transfer!

4 Steps To Learn An Empathy-Building Skill

Tell the child why the empathy skill matters, and how it will boost success. “Mindful breathing helps you stay calm.”

Kids learn skills best by showing what they look like, not lecturing or telling them. (Can you imagine a football coach telling his quarterback, “Go throw the football.”? Of course not!  Effective coaches show how to throw the ball, and then correct players when wrong). Teach empathy skills like a coach.

Learning a new skill usually takes around 21 days of repetition, so choose one new empathy skill each month and practice it together a few minutes a day. Mastering a skill takes lots of practice opportunities. You might role-play the skill together, practice with family members, have the child teach a younger sibling or show Grandma via Skype. Do acknowledge your child’s empathy-building efforts.

Continue providing practice opportunities until the child can use the skill without reminders, reinforcement or coaxing. Even better, make empathy skill-building a family affair, and practice together until the skill becomes automatic and your child can use it alone. 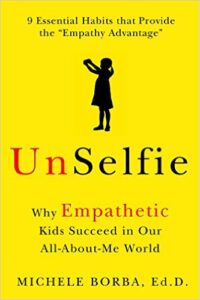 UnSelfie: Why Empathetic Kids Succeed in Our All-About-Me-World: is now in audio, e-book, and hardcopy after a decade of researching and writing. Yahoo! It has over 300 ways parents and educators can increase children’s empathy capacities from toddler to teen, describes the latest science, and dozens of habits, like “I Messages” that you can teach kids and help them acquire the Empathy Advantage.