Why Perseverance Predicts Success Better Than an Ivy Degree 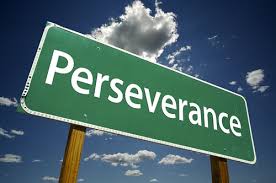 Did you know that more top CEOs in United States graduated from a state college than an Ivy League University such as Harvard, Yale, or Princeton?

Research is showing there’s a far more important predictor of a grad’s future success than the prestige of the school or faculty or even the price of tuition. What matters far more is the graduate’s “personal drive quotient.” The character strength of perseverance trumps GPA when it comes to lifelong success.

Nothing beats stick-to-it-ness and hard work when it comes to boosting success-absolutely nothing. Research continues to confirm that crucial fact, yet we continue to buy into the Ivy League myth. Continuing on that parenting path can jeopardize our children’s potential to thrive.

What the University of Michigan Study Found

One of the most fascinating recent studies on student achievement was conducted by Harold Stevenson, a professor of psychology at the University of Michigan. Stevenson sought to answer a question many Americans ask, “Why do Asian students do better academically than American students?” His book, The Learning Gap: Why Our Schools Are Failing and What We Can Learn from Japanese and Chinese Education, is a hallmark in education and a fascinating read. 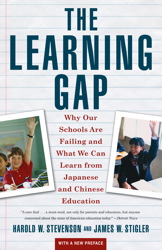 Since 1979, Stevenson’s research team conducted five intensive cross-national studies analyzing students’ achievement in the United States, China, Taiwan, and Japan. Hundreds of hours observing students and interviewing their teachers, the researchers reached a conclusion: a critical key lies in what parents emphasize about their children’s learning. Here’s the difference in parenting styles:

Asian parents strongly stress the value of effort with their children.  Over and again they tell their children, “Work as hard as you can, and you will be successful.” By expecting their children to work hard, and emphasizing the attitude: “there are no excuses for poor grades, you just didn’t work hard enough,” perseverance is nurtured in Asian children. And the parental expectations had a remarkable effect on their children. The researchers found on the whole, Asian children worker longer and harder than their American counterparts because they had recognized their success was based on how hard they worked.

Instead of prioritizing how much effort our kids put into their learning attempts, research found that most American parents emphasized: “So what grade did you get?” or “How many did you miss?” or “Did you win?”

The researchers also found that the effort a child put into their process is not nearly as important to the American parent as the end product of the grade or score.

Stevenson also found American parents place a greater emphasis on their children’s innate abilities. They tend to lower their academic expectations for their children if they perceive them to have lower academic abilities.And so, too often our kids feel empty, and never “good enough.”

An Asian parents’ philosophy is different: any child can succeed regardless of an IQ score or handicap–success is all a matter of how hard you are willing to work.

Just think of the long term effect of stressing effort could have on our children!

Our kids would learn from an early age that there’s nothing that can stop them from succeeding if they put their heart and soul into their endeavors. They would see mistakes or failures as just temporary setbacks, instead of as excuses to quit. If they just keep on trying, and use their mistakes as learning clues, they’ll ultimately achieve their goals!

A Quiz Assessing Your Parenting Emphasis

In an era of “no-child left untested” society, and when the ultimate measure of a student’s success is too often the all-mighty SAT score, it might be a good time to take a serious reality check. After all, what values we model and emphasize to our kids influences how they turn out. So push the pause button just for a second and ponder these queries:

When all is said and done, it’s not that pricey, prestigious degree that will help your child succeed in the real world. What research says will help far more: Your child’s strong “inner drive.” The good news: perseverance can be cultivated in children. It’s all a matter of what we reinforce.

So when’s the last time you acknowledged your child for hanging in there, not giving up, giving it his all, or putting in good old, effort?   If you want to raise a child who thrives, you may want to add those behaviors to your parenting.

My new book, Thrivers: The Surprising Reasons Why Some Kids Struggle and Others Shine is in print March 2, 2021! I’ve spent the last five years researching and writing this book as well as literally flying around the world to find the best ways we can raise resilient children. My goal is to create a conversation that makes us rethink our view of success as exclusively grades, rank and score and include character strengths that can-and must-be taught.! It’s filled with common-sense solutions based on the latest science to help us raise kids with strong hearts, minds and will. It’s time to include “resilience” in our parenting and teaching! Chapter 6 is all on Perseverance and the Stevenson study is part of the opening. I hope you like it. 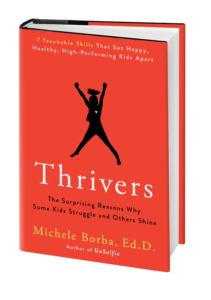