Violent Video Games May Alter Empathy and Brains: 10 Games No Kid Should Play

There’s no doubt that video games are a part of the plugged-in generation’s lifestyle. Research shows that 99 percent of boys and 94 percent of girls ages 12 to 17 play computer, web, portable or console games.More than 90 percent of kids play video games 30 minutes a day. In fact, video gaming is so widespread among American kids that studies show that nearly every teen plays games in some way, regardless of gender, age or economic status.

But that does not mean every kid should be allowed to play every video game!

Many of these game depict violence, blood and killing very realistically. Though your kids may think shooting, killing and maiming, are just a game, parents should be concerned about the affect they could have on kids attitudes toward aggression and their capacity for empathy. 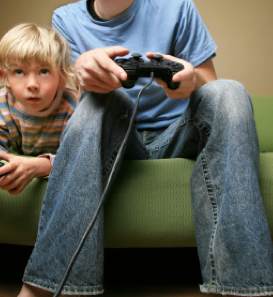 A study just released, lead by Dr. Vincent Matthews and his colleagues at Indiana University, found that those students who played violent video games showed less brain activity in areas that involved emotions, attention, and inhibition of impulses. Researchers used functional MRI to scan brain activity in participants. What’s more, researchers are unclear as to how long-lasting the changes may be.

“Individuals and parents of children who choose to play games need to be aware that there are changes in brain function and they need to consider that when they decide whether or not to play this games,” cautions Matthews in an interview to TIME.

Many child experts (myself included) are also concerned that violent video game playing may desensitize your child to empathy-or that glorious capacity to feel for another.

A University of Toronto study of fourth and fifth graders found that those spending the most time playing violent video games are also most likely to agree with statements such as: “People with guns or knives are cool,” and “Parents should tell their kids to fight if they have to.” Those same kids are also more likely to disagree with statements such as, “When I’m mean to someone I generally feel bad about it later.”

Yes, the research is still out on the long-lasting impact of violent video games, but they do teach kids how to kill. 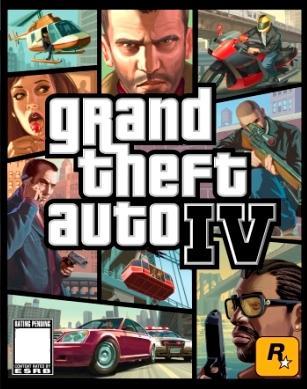 Here is a list of 10 video games from Internet Provider Service that are totally inappropriate for kids. Please know there are many more. Check with commonsensemedia for ratings and descriptions as well as more appropriate alternatives.

1. Grand Theft Auto – This game lets kids play the role of a criminal who commits a range of unlawful acts from auto theft to bank robbery and assassinations. Even though this game is extremely popular, Grand Theft Auto promotes a totally inappropriate role model for young children.

2. Gears of War – This immensely popular video game has sold millions of copies and achieved awards for its detailed visuals. For just this reason, the graphic videos in this game should give parents pause. Even though the quest of the Delta Squad may be noble, the gore in Gears of War isn’t appropriate for young children.

3. Dead Rising – Chopping up zombies is the main activity in the video game Dead Rising. Although it’s won many awards, the graphic violence glorified in this game is not something impressionable kids should be exposed to.

4. Aliens vs. Predator – Set in a futuristic science-fiction world inhabited by aliens and predators, this violent video game is made for adults and not intended to be used by children of any ages. Unfortunately, that’s what makes it so attractive to kids.

6. Resident Evil – Zombies abound in this survival horror video game. The blood and frightening imagery in Resident Evil may be popular with kids, but their parents may have a different opinion.

8. Legacy of Kain – This series of video games was developed for adults and not intended for young children. Legacy of Kain depicts vampires killing each other in various settings and scenarios that are both complex and gory.

9. Devil May Cry – This hack and slash video game may be popular, but Devil May Cry is not appropriate for kids. Playing a happy-go-lucky demon hunter gallivanting around killing all sorts of creepy-crawlies spawned from the depths of Hell isn’t the best role model for children.

10. F.E.A.R. – Even thought the paranormal presence in this video game is a little girl, F.E.A.R. is not suitable for children. First Encounter Assault Recon uses a wide array of firearms and could give your kids nightmares. 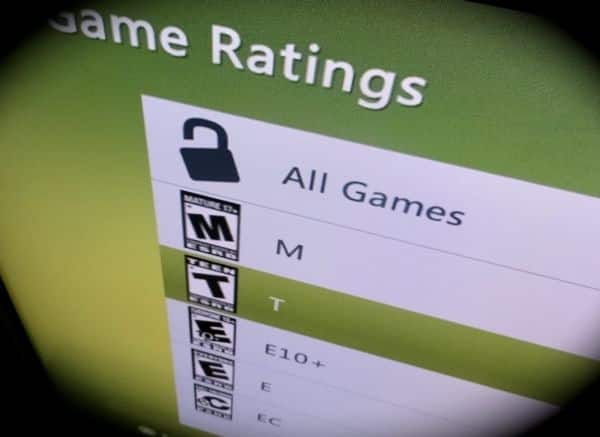 Know and Use the Ratings!

Ratings established by the Entertainment Software Rating Board are prominently labeled on the outside of each video game box.

Teach your kid those ratings so there are no questions or arguments.

E (Everyone Ages 6+): May contain minimal violence, some comic mischief or crude language

Many games appear mild at the lowest skill level but grow increasing violent as the player’s skill increases. So if the box with the rating is missing, watch what your child is playing all the way through to the end or ask your child to give you a demo. These games can appear deceiving. A recent study found that nearly 80% of E rated violent games contain some violence.

One of the most popular-sellers, “Grand Theft Auto” begins as a fast-pace racing game, but as player moves up in the competition (and later into the game) points are earned for knocking a policeman off his motorcycle and running down a pedestrian. You can also hire a prostitute, have sex with her, then knock her out and get the money back.

Make sure you make the ultimate decision on what video games your kids play and closely monitor them. Watch those ratings! And tune into your child’s behavior.

Resources Used in This Article

Video-game ratings established by the Entertainment Software Rating Board cited by “How the Entertained Are Warned,” USA TODAY, May 4, 1999, p. 6D.