Let’s face it, teens have always been risk takers and want to fit in.  Unfortunately “risky” has taken on a new meaning with the dangerous ways adolescents are now trying to get high.

Some of these recent risky trends include soaking tampons with liquor, popping alcoholic-infused gummy bears, drinking hand sanitizer and even “condom snorting” (snorting condoms and then pulling them out of their mouths!). All of these are flat-out alarming. The “Cinnamon Challenge” even encourages teens to chug a spoonful of the spice which can get stuck in their lungs, possibly causing their lungs to collapse. Then there’s the infamous “Eyeballing Challenge” where teens pour Vodka into their eyes, which enters the bloodstream quickly and gives a fast high and disguises the alcohol smell. It can also burn their corneas and cause blindness.

Many parents are unaware of these behaviors and should be more alert to what their teens are doing with their free time. The last thing parents should do is wave the white flag and surrender their influence. By being more involved in your teens’ lives and having open communication, parents can help protect teens from engaging in risky and potentially life-threatening behaviors.

Your first step is to get educated. In writing this post, I’ve highlighted three of the most dangerous ways kids are getting high right now. 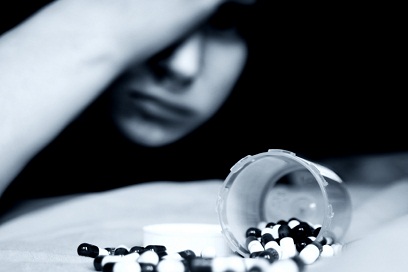 One of the riskiest teen behaviors starts right in your own medicine cabinet. Prescription drug abuse is dangerously high among teens in the U.S., with one in four teens reporting they have used a prescription drug (when a doctor had not prescribed it for them) in order to get high or change their mood.  And the trend is not only increasing amongst teens over the last five years, but is also starting earlier with kids as young as 12 joining the ranks. One in five kids who reports having misused or abused a prescription drug has done so before the age of 14.

And believe it or not, 90 percent of addictions begin in the teen years. Prescription drug misuse and abuse has increased by 33 percent since 2008, as a result of teens and college students using stimulants such as Ritalin and Adderall to “enhance” their final exam performance. Taking and abusing any prescription drug can have potentially lethal consequences, and when mixed with liquor they can become an even more toxic combination. Lesson to parents: don’t make prescription drugs accessible: lock them up and discard outdated medicines.  Ask your friends and family members to do the same.

“Smoking alcohol” is the newest popular teen trend, which has gone viral on the Internet. Chances are your teen has viewed it on YouTube where clips are getting thousands of hits. The user doesn’t drink the booze but inhales it.  Teens put a small amount of alcohol (vodka, beer, whiskey, champagne or whatever) into a bottle, pump it with air and suck up the vapors. Another variation is pouring the alcohol over dry ice and “smoking” the fumes. The result is an instant high.

Inhaling the alcohol is the equivalent of binge drinking or taking a series of shots, but the inhaling effect comes in seconds. Kids can purchase the inhaling equipment for a relatively cheap price, so parents should keep an eye out for new paraphernalia around the house. Doctors warn that the trend is very dangerous because liquor is absorbed so quickly in the brain, and can even lead to deadly alcohol poisoning.

Sizzurp is a slang term (also called Purple Drinks, Purple Drank, Drank, Barre, Purple Jelly, Lean and Syrup) for a so-called recreational drink which users say creates a quick tension or aggression “cure.” Kids combine cough syrup with a soft drink (usually Sprite, Mountain Dew or 7-Up). Adding candy, generally Jolly Ranchers, to the drink is another variation. An extra-strength version of the drink is combining prescription-strength cough syrup containing codeine and promethazine (which teens order from online pharmacies or take from their medicine cabinets) and liquor such as Vodka, Bourbon or Scotch.

In large doses the combination can cause hallucinations as well as drowsiness, an inability to concentrate, slowed physical activity, constipation, nausea, vomiting and slowed breathing. The medical profession warns that the drink is highly addictive and dangerous: just a single drink can be lethal. The trend is celebrated in rap songs, and all over celebrity news because a certain well-known teen “heartthrob” is said to partake in this behavior. Despite warnings, only 45 percent of teens believe that abusing cough medicine is dangerous. Do talk to your teen!

Parents have always been the best firewall to help prevent risky behaviors by their teens. Here are some ways to help protect your child from these potentially life-threatening trends.

Go to drugfree.org/MedicineAbuseProject and educate yourself and your family with great resources, including The Partnership at Drugfree.org’s Parent Toolkit. If you suspect your child might be abusing, visit drugfree.org or call their toll-free helpline at 1-855-DRUGFREE and talk to an expert directly.

When parents model behaviors, kids are more likely to follow in their footsteps. According to a new study from The Partnership at Drugfree.org, 16 percent of parents admitted to consuming too much alcohol, or misusing or abusing prescription drugs (14 percent) in front of their children.

3. Monitor your teen’s Internet use

Many websites and online communities promote the abuse of prescription drugs. Social networking sites provide detailed instructions for getting high, as well as videos of teens doing these trends. Also, check your credit card statements: teens can buy many of these drugs or equipment easily on the Internet.

4. Talk to your teen about the dangers

Teens (and sometimes, parents) perceive that because medications are available in drug stores and prescribed by doctors, they are safe. Talk about the dangers of abuse (and combining those medications with alcohol and other drugs). Share your talks with other parents and your teen’s friends.  Also, remind your teen that no matter how they consume alcohol (snorting, inhaling, drinking or inserting), it is still illegal under the age of 21.

5. Stay involved in your teen’s life

While there are no guarantees, studies show that parents can reduce risky teen behaviors if they are a “hands-on parent” and utilize these parenting practices: Don’t be afraid to say no. Monitor your teen’s comings and goings. Know their friends. Stay involved in their lives. Voice your objections!

Parents do make a difference! Use your influence! Meanwhile, keep repeating this mantra to your kid over and over: “Getting high – no matter how you do it – has health risks that could be permanent.  There are no ‘take backs’ or second chances.”