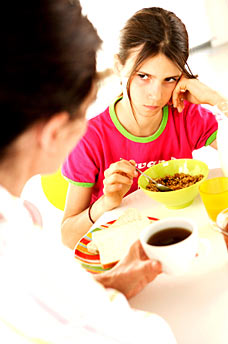 “Boys can’t have eating disorders! That has to be the wrong diagnosis!”

Disbelief is usually our first response when we read the headlines about anorexia, bulimia and binging. But the fact is troubling reports show that teens suffer from eating disorders. The disease has no boundaries: male or female, young or old, urban or rural, Catholic or Jewish, black or white. And the rates are only increasing.

REALITY CHECK: A new report shows that the number of children under age 12 hospitalized for eating disorders has increased 119% in last decade.

Eating disorders among children and adolescents appear to be on the rise, especially among younger kids.

A report published online in Pediatrics estimates that 0.5% of adolescent girls in the U.S. have anorexia and 1% to 2% meet the criteria for bulimia.

The study finds that more boys and children younger than 12 are diagnosed with eating disorders.

The number of children under age 12 hospitalized for eating disorders has increased by 119% in the last decade.

Make no mistake: the consequences are very serious and can be life threatening. Not only is  a child with eating disorders at risk for a stroke, heart disease, high blood pressure, diabetes, asthma, and sleep apnea, but also depression. Anorexia increases a child’s risk of premature death by more than 12 times the expected rate–over 1000 girls die each year from complications. It is crucial that you get educated about eating disorders so you can help your child.

The Parent Primer: 3 Most Common Types of Eating Disorders

As parents we need to know as much we can because these diseases are dangerous and life threatening, and the best cure is always prevention. So get educated! The more you are aware of the symptoms and causes of eating disorders, the better you will be able to help your child. Also know the three most common types of eating disorders:

Anorexia Nervosa: The child is terrified of weight gain or being fat and severely restricts calories

Bulimia Nervosa: The child binges on large quantities of food followed by trying to get rid of those calories in unhealthy ways such as vomiting, using laxatives, fasting, or compulsive exercising

Binge Eating Disorder: This disorder is similar to bulimia but there is no purging (vomiting or using laxatives)

The earlier treatment begins the greater the likelihood that your child will recover or at least make significant progress. That alone is ground to make this change. Signs of an eating disorder are often difficult to detect in the early stages, but the medical profession urges you to watch closer and tune into your child.

Disturbing research finds that kids as young as ten are learning weight loss or purging techniques from Pro-Ana (as in pro-anorexia) and pro-Mia sites (as in pro-bulimia) websites which promote the lifestyle and provide “thinspiration” by posting photos of bony-thin fashion models.

A study at Stanford University found that 96 percent of young eating disorder patients admit  they learn purging and weight-loss methods while logged on.

14 Signs A Child or Teen May Have an Eating Disorder

Eating disorders are difficult to detect in the early stages, but here are 14 signs to look for:

If You Suspect Your Child Has An Eating Disorder If you have even the slightest inkling that your child’s eating disorder could be life threatening stop reading this and drive your child to the nearest hospital or outpatient clinic now. An emergency intervention may be necessary to save your child’s life.

Your child’s doctor can provide names of reputable clinics specializing in eating disorders.

If your son or daughter balks, ask someone to help accompany you during this ordeal or dial 911 and law enforcement officers will help you. Then follow the plan of the doctors.

If you suspect your child may have an eating disorder and this is not an emergency situation, use the next few steps:

Eating disorders are often difficult to spot in the beginning stages. In fact, your child may seem to be on a quest to eat healthier (reducing fat, eating only greens, etc). But act on your instinct and start noting your child’s daily eating habits: what he eats and how much, skipped meals as well as other behaviors such hiding food, eating alone, sneaking to the bathroom and how often and long he exercises. You may need those records to share with a doctor and confront your child with your concerns. Right now your notes will help assess whether or not your worries are grounded.

For many parents the most difficult task is sharing your eating disorder suspicions to your child, but you must so your child can get help. Gear up by thinking what you want to say, and then find the best time to voice your concerns in a caring way. Then listen carefully to your child and hear where she is coming from. She may sound afraid, feel ashamed, get mad or even deny the problem: all are normal responses. Some kids are actually relieved that their private nightmare is finally in the open. Describe the eating or exercise habits that worry you and if needed share your notes.

Step 3. Set up a doctor’s appointment

If you have even the slightest inkling that your child may have an eating disorder, announce a prearranged doctor’s appointment. Do not allow your child to talk you out of it or tell you she’s not ready for treatment. Stress that you love her too much to put her health at risk. Then congratulate yourself: You just carried out the first crucial step toward your child’s recovery. Do not wait to seek treatment.

Tips in this blog were adapted from the chapter on Eating Disorders (pg 498) in The Big Book of Parenting Solutions. For dozens of more practical, research-based tips about this or other topics refer to specific chapters on Angry (pg 232) Perfectionist (pg 272);  Stressed (pg 303)

Over 1000 girls and women die each year from complications of anorexia: S. Chollar, “How to Spot an Eating Disorder,” CNN.com, Apr. 28, 2000 http://archives.cnn.com/2000/HEALTH/diet.fitness/04/28/anorexia.sidebar.wmd/index.html