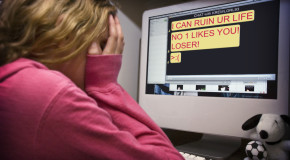 Michele Borba November 18, 2013 Comments Off on 11 Possible Signs of Cyberbullying

What Is Cyberbullying? Cyberbullying is an electronic form of communication that uses cyber-technology or digital media to hurt, threaten, embarrass, annoy, blackmail or otherwise target another minor. Every adult who interacts with kids–parents, educators, librarians,

College Depression: Crucial parental checks before your teen heads back

Michele Borba December 29, 2011 Comments Off on College Depression: Crucial parental checks before your teen heads back

Parent Alert: College mental health crisis and signs your teen may be depressed or at risk of dropping out Your son or daughter is back from college for the holidays! He or she spent

Talking to Teens about Suicide and Depression

Michele Borba April 26, 2011 Comments Off on Talking to Teens about Suicide and Depression

The mothers of two 14-year-old girls who killed themselves in a suicide pact spoke to TODAY’s Matt Lauer about their heartbreak today, saying their daughters had been victims of cyberbullying and suffered from depression —

Time for Mental Detectors: 5 Ways To Stop Another Tragedy & My CNN Report

Michele Borba April 26, 2010 Comments Off on Time for Mental Detectors: 5 Ways To Stop Another Tragedy & My CNN Report

Michele Borba Blog: 1 in 20 kids now depressed: Know signs that could save a child

Michele Borba March 2, 2010 Comments Off on Michele Borba Blog: 1 in 20 kids now depressed: Know signs that could save a child

Always moody. Easily agitated. Sleeps in. Says, “Nobody cares.” Sounds like a typical teen, right?  Well not always. Did you know that depression now strikes one out of 20 teens? What’s more, the rates