10 Reasons To Not Spank Your Child 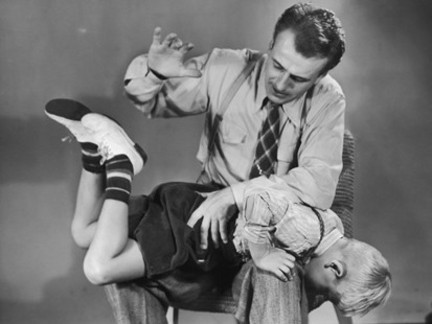 Yes, Kate Gosselin of the infamous Jon & Kate Plus 8 was photographed spanking her child. Oh my! I know this is probably old news and every media outlet from here to Cape Town probably covered it. But with all the flurry that Kate herself succumbed to that ancient parenting tool, my email box is suddenly loaded with “spanking” queries. It seems good ol Parent Guilt is alive and churning in the U.S.A.

Well,why not spank? you wonder. It’s quick, it’s familiar (at least to parents who were themselves spanked as children) and it usually gets kids to stop the offending behavior—at least temporarily. And data shows 70% of Americans do spank. It’s probably the hottest topic I’m asked about in the media (I’ve done a Dr. Phil show, two TODAY show spots, Ricki Lake and I know I’m missing a few others…just on this topic). And it is controversial.

So let’s get two things straight:

First, a swat or two is not going to psychologically damage your kid for life.

Nor will an occasional swat cause your little munchkin to become the next Hannibal Lecter.

But the key question is whether spanking is really the best discipline method to help a child learn to behave.

So here’s the research every parents should know:

In June 27, 2002 The Associated Press released Columbia University’s analysis of six decades of research on corporal punishment. Results linked spanking to ten negative behaviors including aggression, anti-social behavior and mental health problems. Although many parents are unaware of it, continual spanking can have long-term negative effects.Plus it doesn’t work that well in stopping bad behaviors.

My Top Ten Reasons Not to Spank

Here are ten reasons I’d advise you to consider using another discipline technique other than spanking to curb your kids’ bad attitudes or troublesome behaviors:

The bad behavior usually resumes because the kids doesn’t know how to act differently. That’s what the research shows.

2. Spanking teaches the child not how to act right.

The child instead learns how not to get caught whenever the parent is around. The child can become a champion in manipulation.

3. The child is much more likely to remember the punishment than why he was punished.

He behaves out of fear instead of because he wants to act right. Beware, the critical, essential respectful relationship with the parent can be altered.

4. It teaches that hitting solves problems.

Kids must learn acceptable, nonviolent alternatives to solve problems. Spanking is not such an example. Beware: spanking is particularly troublesome for a child who has a shorter “fuse” or quick to anger. The spanking generally increases a child’s impulsivity or aggression which creates a negative cycle. The parent gets more upset…the child gets more angry…the parent gets more upset…the child gets angrier…you get the picture.

5. Spanking teaches children to behave through “external control” (the punishment).

It does not teach kids self-control—or the critical “internal control.” The goal of discipline (and parenting) is to help the child learn self-control.

Adult to child:  “It’s fine for adults to hit, but not kids.”

Empathy–being considerate to another’s needs and feelings—is the cornerstone of moral growth. Studies find that children’s empathy is diminished when their parents control their kids through anger. And let’s be clear-it’s a rare parent who can spank and be calm.

Learning comes through example. Spanking is an aggressive act, showing children their parents acting in an out-of-control manner.

10. No new is behavior is learned from spanking.

Spanking teaches not how to behave right, but how to shout, hit, manipulate, and control others through fear. It also fails to teach a critical discipline lesson: “So why should I behave?????”

There are many ways to effectively discipline children without resorting to corporal punishment. Withhold privileges, grounding, assign extra chores, require restitute or use time-out are a few options. The important thing is to set the consequence ahead of time, make it fit the crime, and then carry through with it every time your child misbehaves. The ultimate goal, of course, is for your discipline to help your child  learn to adopt your family’s values and act right without you…(and know why he should).

The goal of all discipline is to teach your child to take responsibility for his choices—it’s part of helping him grow into a healthy, self-reliant and decent human being.

There ya go. My take.