Stop Child Abuse: I Promised Not To Tell (A Story of Courage) by Kara Tamanini

REALITY CHECK: Here are a few very sobering statistics about our American children: In 2007, almost 800,000 children were victims of maltreatment whether it as neglect, physical, sexual, or psychological maltreatment.  Of these, 59% were neglected, 10.8% were physically abused, 7.6% were sexually abused, and 4.2% were psychologically maltreated.

Tragically, experts feel that the actual number is far higher and for a variety of reasons. Chief amongst those is because children are afraid to report or they don’t think that even if they do report it that nothing will be done to help them.   All studies say that the percentage is staggering and MOST children suffer in silence and most cases of child abuse are not reported. Now there’s a tool to help us help children feel safe to tell us of their suffering so they can get the help they so deserve.

Kara Tamanini, a friend and mental health professional, has just written a powerful children’s book and a horrific topic, child abuse. I Promised Not To Tell (A Story of Courage) is about a little girl named Abby who is abused by her father. 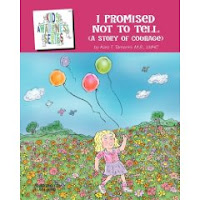 Like most little girls, Abby is very scared and confused and hesitates telling her teachers about what is happening at home, especially because her father is also physically abusing her mother. After working up the courage to tell her teacher, Abby meets Ms. Rogers, a caseworker who talks to her, as well as the school counselor, Ms. Billings. Together, they find a way to help Abby get out of her situation and live with other family members in a safer, loving environment.

Marilyn Van Derbur in her book, Miss America By Day, cites research that the average age of a first-time violation of a child is five or six years old. Equally disturbing is that those children who told a parent before they were 18 said they endured the following responses from a parent.

Peter A. Levine and Maggie Kline, authors of Trauma-Proofing Your Kids, cite a compelling reason we must cultivate a climate of safety in which our kids can tell and be believed. “Those who told immediately or very shortly after the abused and were believed and supported showed relatively few long-term traumatic symptoms. Those who either did not tell (typically due to fear or shame) or who told and then encountered a negative, blaming, disbelieving or ridiculing response were classified as extremely traumatized.”

Kara’s wonderful book is an invaluable tool in helping children learn about abusive relationships and knowing when to seek help. And we must make it safe for our children to tell.

Thank you, Kara, for providing that tool.

Kara T. Tamanini is a licensed mental health counselor and works as a child/adolescent psychotherapist in a Christian counseling center. She plans to expand her website, www.kidsawarenessseries.com by writing more articles and books to help children and adults learn about issues relating to abuse and mental health. She lives with her husband and daughter in Bartow, Florida.