7 Ways to Raise An Ethical Child

Why we must nurture children’s hearts as well as minds: 7 ways to teach kids strong, ethical behavior and character in a decade of moral erosion

This might as well go down in history as the “Decade of Moral Erosion.” Wall Street so-called “leaders,” politicians, celebrities, and even the clergy and their parade of unethical acts were continual news stories.  The Internet became scarier; TV featured more casual sex and vulgarity; political and corporate scandals became raunchier and more public; video games became cruder; music lyrics were ruder; movies were often steamier and more violent.  The list goes on and I’m sure you could add more dozens of examples.

Research is clear that the best way to teach morals and ethics is through example. Just think of what our children are watching and catching.What we may be failing to recognize is that those ethical infractions are impacting our children’s character development and views about the world.

Our children’s social scene is meaner and more aggressive.

Bullying is starting at even younger ages and has extended from playgrounds to cyberspace.

Youth drinking, shoplifting, cheating, lying, stealing, and sexual promiscuity have not only increased but are also hitting our kids at younger ages.

We are experiencing a crisis of youth character and the crisis extends beyond zip code, social status, nationality, race, gender or region.

Most of my work over the past decades has been in the field of character education and violence prevention. I’m on the advisory board of Character Education Partnerships, wrote a series entitled, Character Builders and the book Building Moral Intelligence: The Seven Essential Virtues That Teach Kids to Do the Right Thing.  I’ve also worked with over a million parents and educators on six continents conducting workshops and keynotes in character education. I’m writing this blog from Colombia where I’m here addressing educators and parents on bullying prevention and character development.

The crisis of character is in every region in the world I’ve visited.

So what can you do to help your kids counter negative influences and stand up for what they know is right? The answer is to nurture a solid moral core that will guide our kids to stand up for their beliefs and act right even without us. If we want our children to develop into just, compassionate, ethical citizens we must nurture our children’s hearts as well as minds.

The best news is that we can teach kids the core virtues and skills of strong character and moral courage and can begin when they are toddlers. Here are seven ways to boost our children’s character and we haven’t a moment to lose.

Here are seven tips you can use to help your kids stand up for their beliefs, buck negative peer pressure, and live their lives guided by integrity. Just remember: it’s never too late—or early__to start.

1. Know what you stand for so your kid knows

Parents with clearly identified moral convictions are more likely to raise good kids. Because their kids know what their parents stand for and why they do, their kids are more likely to adopt their parents’ beliefs. So begin by asking yourself what virtues and moral beliefs matter most to you. Make a list, and then narrow your values down to your top three. These will become your personal moral code and guide you in how you will raise your child. Doing so is also the best way to help your child develop his own moral beliefs.

One great question to ask yourself each day is: “If I were the only example my child had to learn moral habits, what did she learn today from watching me?” The answer can be quite revealing.

By watching your choices and hearing your casual comments, kids learn our moral standards.

Aristotle taught us hundreds of years that the best way to teach character is through example. Make sure the moral behaviors your kids are picking up on are ones that you want your kids to copy. And then make sure your child is surrounded by examples that boost character and integrity.

How many of these messages apply to you?

How Well Do You Walk You Talk To Your Kids?

Speaking frequently to your child about values  is called “Direct Moral Teaching.” Parents who raise ethical kids use it often.

So look for moral issues and talk about them as they come up: from TV shows and news events to situations at home, school, and friends. Tell your kids how you feel about the issue and why.

Share examples of morally courageous heroes such as Rosa Parks, Pee Wee Reese, Harriet Tubman, Abe Lincoln. There are wonderful books and videos in your local library that you can also share with your child.

Cut out fabulous articles in the newspaper and use them as “Hero Reports” at the dinner hour with your kids each day.

Stand up for your beliefs whenever you feel a major value is jeopardized. Your kid needs to see and hear about moral courage so he has an example to copy.

Questioning is an important parenting tool for enhancing children’s consciences and strengthening moral beliefs. The right kind of questions can help kids expand their ability to take another perspective and ask themselves: “Is this the right thing to do?” Both are critical precursors to taking any moral stand.

“How would you feel if someone treated you that way?”

“If you don’t follow through on your word, what do you think would happen?”

“If everybody acted that way (i.e. cheated, shoplifted) what would happen?” 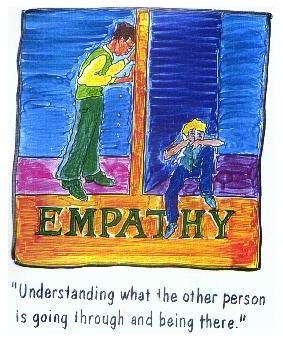 Kids who stick up for others are kids who feel for others. Empathy is what motivates that feeling, halts cruel behavior and urges kids to take a stand. New research also shows empathy is what activates conscience.

For more ideas go to my blog, Nurturing Children’s Empathy as well as dozens of articles on instilling kindness and tolerance.

Ask: How would you feel? Ask kids to ponder how another person feels using situations in books, TV, and movies as well as real life. It forces them to think about other peoples’ concerns.

Use role playing. It helps kids to imagine others’ feelings as a way to boost perspective taking and empathy, so ask your child to think how the other person would feel if roles were reversed. “Switch sides: what would the other person say and do?”  Young kids can use puppets or toy figures to act out the problem from both sides.

If you want to raise a child who can stand up for his beliefs, then reinforce assertiveness—not compliance. Encourage him to share his opinions and stand up for what is right. And do so from early age so he can weather the storm of negative peer influence.

Parents who raise morally courageous kids expect their kids to act morally—even demand that they do.

The truth is that it takes real moral strength to go against peer pressure and to stick up for your beliefs. So teach your child assertive skills so he can take the right kind of stand whenever he’s confronted with a moral dilemma. Here are three ways to boost moral courage but you must practice repeatedly with your child until he or she feels comfortable and confident using these techniques in the real world:

Teach assertive posture. Teach your kid to stand up for her beliefs by using confident, assertive posture: stand tall with feet slightly apart, head held high, and look the person straight in the eye. That posture helps convey confidence to the receiver and a stronger conviction in beliefs.

Say “no” firmly. Stress to your child that he must say his beliefs using a friendly, but determined voice. Then don’t give in. His job is not to try changing the other person’s mind, but to follow his beliefs.

Tell why. Ask your child to give the person the reason for his stand. It helps strengthen his conviction: “Stop bullying him; it’s cruel.” Or “No, it’s illegal and wrong.” Repeating the belief several times boosts assertiveness and helps your child not back down from his stand. Remember, in order to say no, a child needs to understand what to say no to.

Without a solid inner belief as to what is wrong or right, it’s tough to have conviction. So go back to Tip #1 and start all over again.

Keep in mind that your child’s moral growth is an ongoing process that will span the course of her lifetime. The moral knowledge, beliefs, and habits you instill in your children  now will become the foundation they’’ll use forever. So savor this time with your child and use it wisely, for although your child has the potential to achieve moral goodness, it is far from guaranteed. It must be nurtured, influenced, modeled, and taught. Doing so will be your greatest legacy for your child and the best hope that she can rise to the occasion and demonstrate moral courage whenever it may be needed.

You can also find dozens of research-based and practical tips to raise strong kids from the inside out in my latest book, The Big Book of Parenting Solutions. Portions of this blog were adapted from my book, Building Moral Intelligence: The Seven Essential Habits That Teach Kids to Do the Right Thing.