In California (my state), 18 to 24 year olds are smoking at an increasing rate and are now recognized as the fastest-growing age group using tobacco.

Nine out of the adults took their first puff in their teens or earlier, and then continued that deadly habit

More than 2,000 children under the age of 18 start smoking each day.

The American Academy of Pediatrics warns that if current patterns of tobacco continue, an estimated 6.4 million children will die prematurely from a smoking-related disease.

Data released this summer found that though teen cigarette smoking has been on the decline overall since 1999, that drop has suddenly slowed. The CDC data came from survey of hundreds of high school students in grades nine to 12 in both private and public schools from all 50 states and found that smoking among high school students began to decline in the late 1990s, but the rate of decline slowed during 2003–2009.

More kids are trying their first puff in those teens years.

Smoking is a huge health risk to our teens.

Smoking decreases a child’s life by at least ten years. Research also shows that teen smokers get addicted quicker and from lower levels of nicotine than adults. And 85 percent of people who begin smoking before the age of 19 become lifelong smokers.

So what are the best ways to curtail this potentially deadly habit? How do you stop adolescents from taking those puffs –especially when they feel they are invincible and all their friends are puffing? Here is parenting advice based on proven research that shows what works best at stopping kids from acquiring this deadly habit.

1. Don’t smoke. Period. Research clearly shows that parental attitudes and behavior about smoking influence their teens. In fact, many teens begin smoking because they see their parents smoke. So don’t light up. If you must smoke, don’t do it around your kids. Keep cigarettes out of sight and out of reach. Doing so could not only save your life but also your teens.

2. Talk it over. Start talking to your kids about the dangers of tobacco. And start those conversations early. Let your kids know that tobacco is addictive and often deadly. Be sure to point out that it’s easier to become addicted as a teen. Bottom line: Take a big stand against smoking.

3. Predict the future. Teens see themselves as invisible but they need to understand the deadly possibilities. So describe how nicotine addiction affected your family: Great Aunt Harriett suffered from lung cancer; your best friend died from a stroke; Uncle Bill died from cancer. Putting faces to those statistics can help break through that teen attitude: “It can’t happen to me.”

4. Enforce a zero smoking ban at home.Sit down as a family and clearly spell out a “No smoking ban” in your home. Post a sign. Sign a contract. Tell the relatives. Trash the ashtrays. A four-year study of over 3,834 teens and found that a home ban was effective. So don’t allow smoking in your home.

Investigators from the Boston University School of Public Health found that teens who live in homes with clear smoking bans are more likely to develop antismoking attitudes. They are also less likely to become smokers than those teens living in homes which did not ban smoking.

5.Teach ways to buck peer pressure and refuse that puff. Studies show that many teens that smoke often lack the ability to buck peer pressure. When their buddies push them to light up, they often give in so they can be part of the crowd or to stop being harassed. While you should expect peer pressure, do help your teen learn lines to help buck that inevitable peer push to light up: “No thanks.” “I promised my Grandpa I’d never light up.” “I get a huge headache.” Or tell your kid to use you as an excuse: “My Mom can smell a cigarette a mile away and will take away my license.”  The key here is to brainstorm options, and then have your teen choose the one line that he feels will work best for him. Then practice, practice, practice. 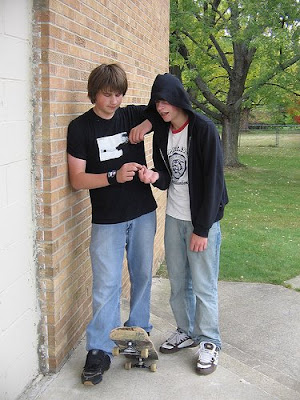 6. Check their friends and curb the smoking appeal. Friends are the most influential people in a teen’s life so watch who your kid hangs around. It’s a lot harder to say no when all your friends are puffing away. “If a teenager feels smoking is socially acceptable and widely practiced, they are much more likely not only to smoke, but also drink and possibly use marijuana,” says lead author Dr. Jennifer A. Epstiein, assistant professor of public health in the Division of Health Behavior at Weill Cornell Medical College.

7. Watch those movie ratings. A survey of 6,522 U.S. adolescents, found that those at low risk to begin smoking are strongly influenced by those “bad guys” smoking in movies. Watch those movie ratings, and restrict your kid from especially R-rated ones, which tend to have more smoking. Even then talk to your kids about what they are watching to try and stop them from starting this habit. Point out the negatives!

8. Add up the cost. Help your teen do the math about the costs of this habit. Get out that adding machine and do a quick math lesson. How much is one cigarette a day? Start multiplying. Add up the cost of a pack of cigarettes. Then add up the number of cigarettes a friend might puff in a day. Finally convert cost to the price of something meaningful to a teen: car insurance, stereo-system or that pricey handbag she’s dying to have..

9. Don’t overlook depression. Psychologists investigated the relationship between teen smoking and depression in 1,218 adolescents. They found that heavy teen smokers were likely to have more depression symptoms than the adolescents who reported smoking less. Don’t overlook that depression may be a hidden reason for your teen’s smoking. When in doubt, check with your medical professional.

10. Get help for your teen! If your teen is addicted, then those “Stop smoking” lectures will get you nowhere. It’s time to get professional help. Check your health insurance policy. Many policies cover medical coverage to help fight a tobacco addition. While smoking is a leading cause of death, it is the most preventable.

Don’t wait! Please commit to having that “Smoke-free” chat with your child today.

Tips from this blog were adapted from the chapter, “Peer Pressure in my book, The Big Book of Parenting Solutions: 101 Answers to Your Everyday Challenges and Wildest Worries.

You can also refer to my daily blog, Dr. Borba’s Reality Check for ongoing parenting solutions and late-breaking news and research about child development.

Resources for this blog: